Friday Family History: Adding to Our "Remember When" Stories

November 16, 2012
Who will ever forget the time I tried to help John and ended up e-mailing his boss John's new job offer?  Though I hope never to top that incident, "The Time We Went to Utah to Celebrate John's 50th Birthday" certainly deserves its own page in our family history story.

It all started innocently enough, as these humorous stories often do.  I kept scratching my brain, trying to come up with a celebration worthy of the occasion--one John would enjoy without embarrassment.  Aha!  How about tickets to a BYU football game?  They didn't play on his actual birthday, but played a week later (close enough) on a Saturday of a three-day weekend.  Perfect.  We could drive to Utah, spend time with some of our kids and John's parents, and enjoy reminiscing at our alma mater.

I found tickets for some great seats, and we both started anticipating game day.  Our first indication that things might not go as planned happened when we received notification that the game would begin not at 1:00 p.m. as we originally thought, but at 8:15 p.m.  We realized then that we might be in for a bit of a chilly night.  No problem.  We made sure to pack accordingly:  layered shirts, heavy coats, beanies, hoods, gloves, etc.

The text on Friday morning from our youngest son provided the next clue:  "It's snowing here now so be careful driving!" Fortunately, John has lots of winter driving experience, but we started to wonder if we were going to become human snowmen come game time on Saturday.

The closer we got to our destination, the heavier the snowfall.  Fortunately, we arrived on Friday night, and the game didn't start until Saturday night.  That provided plenty of time for the snow to melt accumulate even more.  John's dad kept saying how this was the biggest snow storm they had experienced in several years.

John tried out the snow blower, intent on clearing the driveway and sidewalks for his parents. The snow blower apparently does well for a foot or less of snow. Unfortunately, the snow was deeper than that. John slipped while operating the snow blower and got the wind knocked out of him. Fortunately, he didn't have any lasting injuries. Yep, I sure know how to pick a memorable birthday experience!


When we arrived in Provo on Saturday afternoon, the snow had stopped.  We became hopeful that we would only be cold, not wet and cold.

Driving to the stadium, we encountered the usual traffic.  We finally found a place to park.  John rolled down the van window to pay for parking, and immediately grew concerned.  The window would not roll back up, no matter how many times he pushed the button.  We finally decided to just go ahead and go to the game.  We covered the open window as best as we could with a window shade, habitually locked the van, and made it into the stadium just in time for the singing of the national anthem. 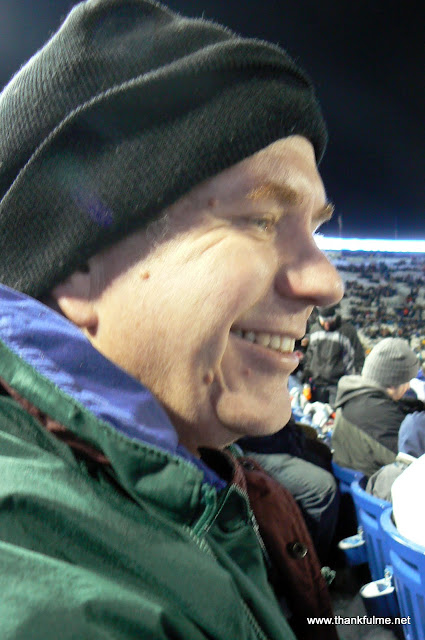 Getting to our seats was not without adventure, however.  Remember, it had been snowing earlier, and the temperature was frigid.  We climbed the stairs to our row.  Two men were sitting in the aisle seats.  "Careful," they said, "It's really slick."  They were not kidding!  I kept a firm grip on the seats as I skated past the men, apologizing in advance that I might end up sitting in their laps.  We finally arrived at our seats, after giving similar apologies to other fans in our row.

We enjoyed watching the game, as BYU took an early and commanding lead.  The first couple of touchdowns, we stood to "Rise and Shout" as we sang the fight song, but the fear of falling soon overtook us me, and after subsequent touchdowns, we sang from the safety of our seats.

By the time halftime rolled around, BYU had already scored 42 points.  The opponents had scored 7.  Unless something drastically changed, BYU would emerge victorious.  And unless something changed, John and I would lose feeling in our toes.  John said he had enjoyed his birthday gift, but he was ready to go.

After skating down the aisle once more, again managing to avoid sitting in strangers' laps, we ventured back to the van.  My silent prayer for a window miracle went unheeded.  We drove back to John's parents' house--a 40 mile trip--with window down and heater blasting.

Just about the time we got on the freeway, the snow started coming down again. The closer we got to the house, the harder it snowed. Cars started sliding off the interstate. Snow blanketed the surface streets. Every traffic light shone red as we climbed the hills, making driving even more difficult. John's experience with winter driving paid off, though, and we eventually made it back. John parked in the street, grabbed a snow shovel, cleared the driveway, and eventually got the van parked off the street. Then he taped a plastic garbage bag over the open window.

The next day, the news reported that the snowfall record set in 1886 had been broken. John's parents' place received around 2 feet.


John and his dad again tried unsuccessfully to get the window to roll up. Barring that, they rigged up a makeshift "window". 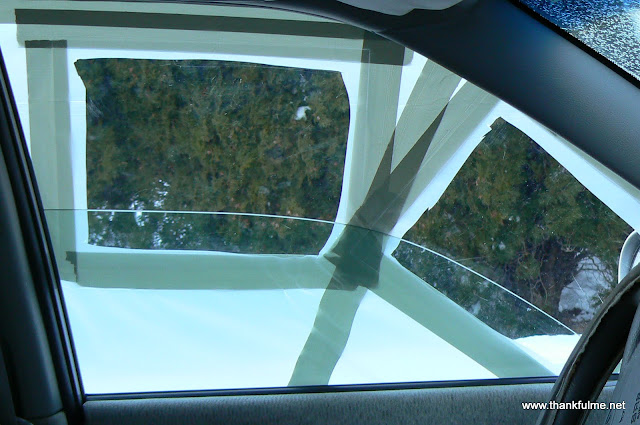 Except for being a little noisy--and more tape helped with that problem--the "window" served its purpose of keeping the elements at bay.  It lasted the whole drive home--600+ miles.

John assures me that he had a great weekend.  Let's recap:  driving long hours on slippery roads, having the wind knocked out of you, skating to the seats, freezing through 1/2 a football game, and driving in inclement weather with the window rolled down.  What better way to celebrate a milestone birthday, right?

With the win, BYU became eligible to play in the Poinsettia Bowl.  John hasn't yet answered my question of whether or not I should buy tickets.  Given my track record, I don't blame him.

Thanks to John, who is a really good sport.

Ten Things of Thankful: Another Trip Around the Sun

October 23, 2020
A mixed bouquet of pink and purple flowers sits on a round table Last weekend, I celebrated another birthday. I think the earth moves around the sun faster and faster each year, but I can't prove it. Before another minute goes by, let me share my Ten Things of Thankful list for this week. I'm thankful for family: A birthday dinner with my daughter Birthday calls/texts from family members Beautiful flowers from my children A Facetime call with grandchildren. (My grandson repeated three words the entire time: "I am three!" At one point, I told him I would call him Groot.😉)  Drexel and his laid-back nature (The following video shows Drexel on the floor, while the robotic vacuum repeatedly runs into him and starts up his hind leg and tail. Drexel never gets up.) John and his engineering skills. Yesterday, the bishopric of our ward (church congregation) drove around the neighborhood and (taking care to observe covid recommendations) passed out doughnuts to everyone. Eac
8 comments
Read more