Ten Things of Thankful: At Least it Wasn't a Boring Week 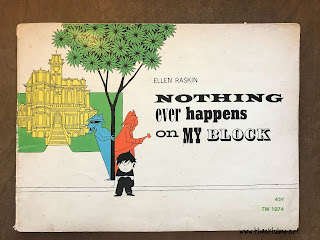 The front cover of the children's book, "NOTHING ever happens on MY BLOCK" shows a sulking child sitting on the curb, with a fireman and a robber behind him

I've mentioned the children's book Nothing ever happens on My Block in a previous Ten Things of Thankful post. In the book, a child complains that nothing ever happens on his block. Meanwhile, in the background, a whole lot of things are happening. In 2020, especially at the beginning of the pandemic, it felt like everyone was isolated in their own homes doing quiet things while the world raged on. It was as if all the excitement was happening outside, but inside remained calm. It still feels like the world is raging on, but (wearing a face mask and observing all recommendations) I'm not quite as isolated as I was in spring. I still don't get out much, though, and even when I do, it's often to use curbside pick-up at the store, so all-in-all, I lead a pretty basic (yet satisfying) life. This week, though, I learned that despite my best efforts at a peaceful, calm existence, sometimes things can get exciting. I'm thankful for the reminder that life--no matter how calm--is not boring.

Sunday morning, after a good night's sleep, I opened up Facebook and realized that John and I might have been the only ones in our neighborhood that slept well Saturday night. Everyone else was up all night looking out their windows and checking on the status of a wildfire that broke out in a nearby canyon. Part of the city was evacuated, but the fire did not cause evacuations in our neighborhood. I trust that had our neighborhood been evacuated, we would have been notified by a pounding on the front door, but as we didn't need to go anywhere, it was nice to get a good night's sleep. I'm thankful for being able to sleep, especially when something out of my control might have caused insomnia had I been aware of it.

Spoiler alert: the evacuation order was lifted, no homes were lost (well, there was a house fire in another part of the city on Sunday, but that was unrelated to the wildfire), and the fire is mostly contained now. I'm thankful for firefighters and for safe outcomes.

Monday I made some pear sauce (like applesauce, but using pears) from the fruit from our tree. I was so proud of myself for picking the pears at the correct time. Pears need to be picked green and allowed to ripen off the tree, to avoid mushiness. John and I got them all picked, which had the added benefit of not having to clean up dropped fruit from under the tree. The pears had been sitting in boxes on my counter for a couple of weeks, and it was good to get them used up. I'm thankful for a bounteous harvest and for having counter space back.

Tuesday things got unexpectedly exciting when I had a car accident inside the car wash, while following the "car in neutral, foot off brake, hands off wheel" instructions. For all the details, go read "What's in a Name? Being Thankful When I'm Not."  It took me a while to have my inside emotions match my (hopefully) calm exterior, but once I did I remembered that I'm thankful no one was injured and I'm thankful for the smiley face on my window.

Wednesday I got the pear sauce canned and got inspiration for a Six Sentence Story. I'm thankful for the tradition of canning. (I'm sure my mom never imagined she would hear that; helping with canning wasn't exactly my favorite activity as a kid.) I'm also thankful for Denise for hosting the Six Sentence Stories blog hop. She's a great host, and I can learn a thing or two from her.

I'm writing this on Thursday. I was brave this morning and took our other vehicle through the car wash, without incident. So far, it looks like Tuesday was the end of the terribly exciting events. Fingers crossed. However, regardless of what happens between now and the time this post gets published (and beyond!) I'm thankful for John. While most of the time, our home offers us a "nothing ever happens on my block" kind of existence, when we have a "wildfire and weird car crash" kind of week, we can shake our heads and laugh together (after reviewing our evacuation plan).

How did your week go? What are you thankful for today? I love to hear from you!

Linking up this week:

A Multitude of Musings

On my Way Home

A season and a time

Backsies Is What There Is Not

You are invited to the Inlinkz link party!