While I know that snow in May is not impossible here, I'm beginning to think that spring has come to stay (at least until summertime.) No snow is predicted for the upcoming week, flowers are blooming, and trees are leafing out. With temperatures forecast in the 70's today, and no clouds in the sky, the mood here in Utah is fairly positive. Gratitude flows easily.

1. I'm thankful for Easter. Of course, the pain, agony, and suffering Christ endured is unfathomable, but the good news is that His act of love, and His resurrection from the dead, offers hope to all of us. I believe Easter is meant to be joyful. He overcame death for us! Just as a mother would not speak only of the pain of childbirth and mention the new baby merely as an after thought, I think that Jesus wants us to have the focus of our Easter celebrations be the underlying reason (love) and the outcome (hope). In my opinion, we need to be sure that when we think of the what of the events of Easter, we should never lose focus of the why.


2. I'm thankful for my youngest son, whose birthday happens to fall on Easter this year. He is a miracle. Early on, a doctor suggested to me that many people experiencing the same problems in pregnancy would just terminate and try again later. I am not many people, and while I did not know what the outcome would be, I was willing to take a chance. I am so thankful my son not only survived, but has grown up to be a really nice person. Happy birthday, son!

4. As anyone who has stayed with us when we've needed more than one guest room can attest (but would not, because they are all very nice), my office/second guest room has been in a less-than-welcoming state since we moved in. Basically it was the catch-all room for anything that needed a place to go, but hadn't been relegated to the basement. I have been working hard to organize, de-clutter (would have been better to have completed this prior to the move, but oh, well), and beautify my office. This will be an on-going project (digitizing photos/papers, shredding no-longer-needed paperwork, etc.), but at least now I smile instead of grimace when I go into the room. I'm thankful for the progress.


5. I'm thankful for a text from a friend this week, informing me she would be in town soon, and asking if we could we get together sometime. YES, of course! I haven't seen her since we moved to Utah, and am looking forward to catching up.

6. I'm thankful for a call from another friend, and the possibility of seeing her this summer.

7. Moving away from friends is hard, and without children in the home now to expedite the making new friends stage, I feel like the process of establishing relationships is just taking longer than it used to. However, moving also brings the opportunity to get to know more people, and make more friends. Make new friends, but keep the old. I'm thankful for how welcoming everyone has been, and slowly but (hopefully) surely, I am learning names. I'm thankful for book club and a baby shower I attended this week, because they are great excuses to get to know people better.

8. I'm thankful for an unexpected tweet, informing me that I had won some swag from Relative Race. 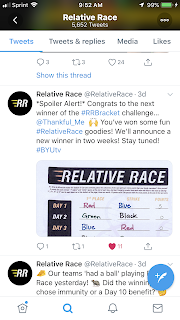 Relative Race is a TV show that takes 5 teams of two and, using results from their DNA tests, sends them on a 10-day journey to destinations all over the United States to meet family they didn't know. Oh, and it is a competition, with $50,000 as the final prize. Each day, the team that comes in last (based on their individual allotted time for the day), receives a strike. The grand prize, though, is connecting with relatives, and all the teams are sad when a competing team receives three strikes and has to drop out of the race.

Currently Relative Race is in its fifth season, so if you go to the website, you can have a nice binge-watch session!

9. While Relative Race is my favorite show, it's not the only thing I watch. John and I had fun watching the latest episode of Show Offs, not only because it is an enjoyable improv comedy show, but also because we saw ourselves on the screen! We were able to attend a taping last fall, and it aired this past week. I'm impressed with the skilled performers, who were able to pull off a broadway musical in a matter of minutes. (And now I will forever have the new song, "Holy Cannoli" stuck in my head!)


10. As always, I'm thankful for John. It's less than a week until our 32nd anniversary! That sounds like such a substantial number, but I've double-checked my math. Obviously, we were born already married. . . or we're older than we feel. I'm thankful that we have had great years together, and look forward to many more to come!


Because of the holiday, and because I have visiting family, I might not respond to comments, read posts, or link up posts in text until Monday. However, please do comment and/or join the blog hop. I always love hearing what you are thankful for each week!


You are invited to the Inlinkz link party!
Click here to enter