October 21, 2011
It's been a month since our last garden walk.  I wish I could capture the sound of the birds chirping, the scent of the roses, and the gentle warmth of the sun, and somehow relay those sensory delights to you, my readers.

Before we begin this month's walk, let's look back at the "after" photo from May of this year: 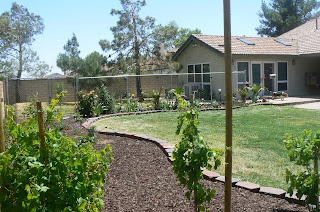 I couldn't even take a good shot from the exact spot now, because the grapes have grown so much.  Standing in front of the grapes and shooting in the same direction, this is what I get: 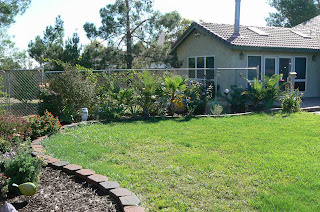 I guess things have grown!  It shouldn't appear quite so crowded once the palm trees get a little taller, and their fronds provide an upper canopy of greenery.

Here's a photo of the over-achieving grapes.  We are going to have to do some pruning this winter.  I'm new to grape-growing, so any tips are appreciated!  We've got one red flame--it produced this year--and several Thompson's seedless. 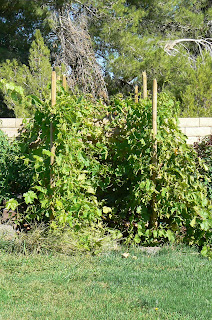 One of my favorite parts of the yard is the north wall area, where the flowers have just taken off!  The blue potato vine--I think that is what it is commonly called--was here when we moved in, though it was looking very sad.  I did some severe pruning, and this year I'm finally realizing the beauty of it. 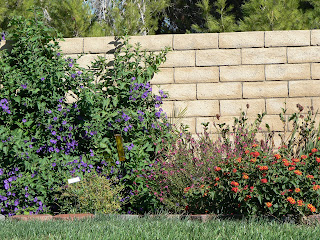 Here's a close-up of it: 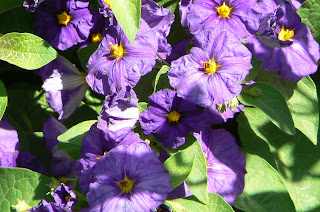 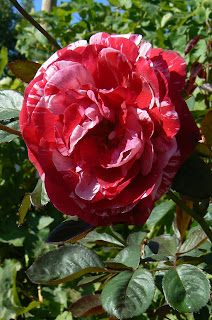 John's dad gave us "squashkin seeds."  They are much bigger than our pumpkins! 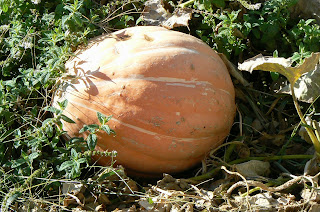 And here's one of part of my fall garden.  Hopefully they will survive Peter rabbit, who is seen every morning. 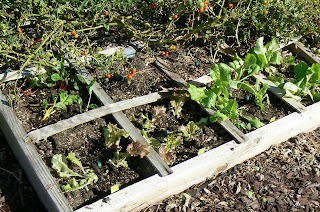 Thankful thought:  Thanks for my grandpas who were committed to growing plants.  One had a farm, and the other built an underground greenhouse in central Oregon where he raised tomatoes year-round! 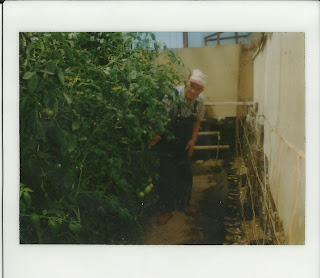