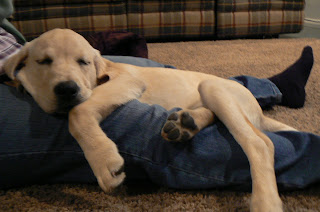 Nicki has been busy, and let me tell you, it is exhausting to keep up such an active social schedule!

I'm hoping I don't jinx this by saying so, but she is an excellent passenger in the car.  She hops right in and settles herself on the floor of the backseat.  Not a peep out of her, no roaming around the car, nothing.  The most difficult thing is convincing her to get out of the car once we arrive at our destination.  She's small enough now to just pick up, but eventually she needs to come out on her own.

She came with me this morning to drop off, and to pick up, youngest daughter from seminary.  We got to the church a few minutes early at pick up time, so Nicki had a chance to walk around and greet the kids as they came out of the church.

Later in the morning, it was off to the Scout shop, then the library.  In the afternoon, she took a walk around the neighborhood, then a stroll around a park.  Tonight was action packed, as Nicki attended cub scout pack meeting.  She watched pumpkins being launched in a huge sling shot, then observed the boys while they played dodge ball.  She thought the balls looked fun, but she was a good dog and sat by my side even amidst all the excitement.

After arriving home, and having me pick her up out of the car, it was all she could do to stagger inside and collapse.  She's still snoring on the floor as I post this.

Oh, a tired puppy is a happy puppy.

This afternoon, we spent some time out in the backyard, and it was then that I saw this beautiful butterfly: 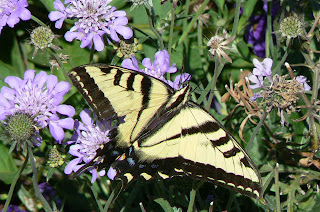 Thankful thought:  Thanks for cute puppies, beautiful butterflies, and all other creatures who fascinate, amuse, and delight.