Introducing my Mother-in-Law to Disneyland 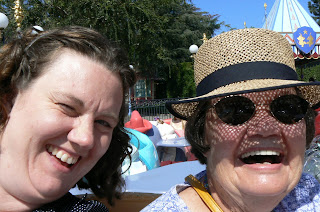 To sum it up, we're both having a great time!

Over the summer, John's mom mentioned that she had never been to Disneyland.  I quickly issued an open-ended invitation to come down anytime and we'd have a girls' vacation week.  Well, Wednesday I picked her up from the airport.  We dined at the Cheesecake Factory (yum), managed to find the car again after a Twilight Zone-esque experience, and stayed at the Ayres Hotel that night.

Yesterday, we were off to the big D.  After procuring her "First Time Visitor" button, we were ready to hit the park.  It was much more crowded than I expected on a September weekday, but we still managed to see and do quite a bit.  We started in Fantasyland with the classics:  Peter Pan, Mr. Toad's Wild Ride, Dumbo, Pinocchio, Snow White's Scary Adventures, and a walk through Sleeping Beauty's Castle.  We ate loaded baked potato soup at the Carnation Cafe, and shook chef Oscar's hand on the way out.  (He's been working there since a year after the park opened, from what I understand.)

Great Moments with Mr. Lincoln was followed by Winnie the Pooh and then the Haunted Mansion.  I learned that John's mom is a fan of The Nightmare Before Christmas (who knew?), so she loved the mansion.  (She was quite impressed with Great Moments with Mr. Lincoln, though!) After that, we took a break in the Golden Horseshoe Saloon and waited for Billy Hill and the Hillbillies to perform.  They did not disappoint.  One of these days I need to learn the Orange Blossom Special!

After the show, we went on the Jungle Cruise and to the Tiki, Tiki, Tiki, Tiki, Tiki Room.  With songs ringing in our ears, we walked to Cafe Orleans for pommes frites and a Monte Cristo sandwich.  (Is there a food that raspberries do not improve?) We then boarded the Disneyland railroad and rode until the next stop, where we disembarked and then replaced the Tiki Room song in our heads with "It's a Small World."  Fortunately, we had impeccable timing.  As we exited Small World, Mickey's Soundsational Parade was just about to start.  We watched the parade, and listened to lots of songs other than "It's a Small World".  Following the parade, we had just enough time to ride Star Tours before the park closed.

I had fun, but more importantly, John's mom seemed to really enjoy herself.  We did a lot of laughing, as evidenced by the photo we took of ourselves on Dumbo.  We'll tackle California Adventure next week, and hopefully have just as much fun!