Ten Things of Thankful: The Line is Gone and Other Thankfuls

That photo sums up a huge thankful on my list: both John and I are once again testing negative for covid. (Thankful #1)We didn't have that bad of cases, but we certainly were wiped out. We now understand the phrase, "binge watching TV," as John has gone through season after season of Fear Factor, and I managed to get through all of Virgin River. (A strange, but nonetheless thankful #2) We've had lots of discussions on who would do which part of the stunts if we were ever to face Fear Factor challenges. (I will gladly be covered in boa constrictors, but John will need to do the walking around 80 feet in the air. If either of us has to eat scorpions, we might as well forget it.) Virgin River was an enjoyable, albeit formulaic show. Basically much of the conflict in the series comes about because someone told someone something that they were asked to keep confidential. However, the characters do have depth and development, so whatever the writers are doing works.

While we were recovering, several of our neighbors stopped by with dinners. (Thankful #3) It's not easy to accept help, especially because we weren't terribly sick, but I have learned over the years that just because I CAN do something doesn't mean that I should turn down help. The meals were delicious and much appreciated.

As our energy levels came back, we started spending more time in the backyard. (Thankful #4) Yardwork has taken a backseat over the past year, and I've been looking forward to taming the jungle again. We do have a vegetable garden, but a big part of it is comprised of whatever seeded itself from last year (here's looking at you, broccoli and cilantro!) While it's far from tidy looking, at least now the weeds are starting to get cleared out. While weeding, I discovered that some of seeds that were planted indoors in pots by children and plopped into the garden have matured into pretty flowers. It's a sweet reminder of time spent together. (Thankful #5)

I tested negative a few days before John (I was patient zero in the house), but once he also tested negative, we celebrated by visiting a nursery and purchasing a couple of shrubs to add to our yard. (Thankful #6) We weren't exactly sure what we were going to buy ahead of time; I had a list of possible plants that should grow well in our area, but I'm happy with what we decided on: a limelight hydrangea and a spinderella hibiscus. They should both add impact in summer and early fall. 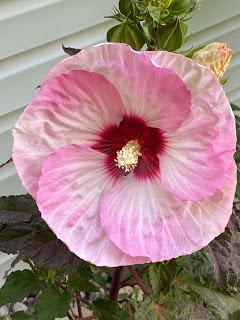 Tonight, I'm going to get together with my brother and niece, who are visiting from out of state. (Thankful #7) Covid messed up our original plans to have them stay here with us, but fortunately we recovered in time to still be able to see each other.
Speaking of original plans, John and I have been planning a vacation. It all started when we had airline credits from a trip canceled in 2020. Those credits were going to expire. We looked at where we could fly for the value of the credits, and realized that if we planned things well, we could fly to one city, take a shuttle to another, then go on a relatively inexpensive cruise. We planned everything around that shuttle connection and booked the various legs of the trip. Shortly afterwards, the airline changed its mind about having credits expire, but that's OK, the vacation is booked and we're looking forward to it. Then the shuttle company called us to say that they had a change in their schedule and weren't available for our return trip. We grumbled a bit, changed our return flight (at a cost to us), found a different shuttle company, and reserved a rental car for one day. The straw that broke the camel's back was the next call from the original shuttle company informing us that they had to reschedule our first shuttle to the day before our flight arrives. Obviously that won't work. After checking into all the various possibilities (different flights, etc.) we canceled our flight, canceled the shuttles, canceled the rental car, and decided we would just drive ourselves to the port. Now we still have the airline credits that started this whole mess, along with a vacation that was planned around those credits, so I guess we came out ahead? In any case, I'm thankful for the ability to take vacations. (Thankful #8)
As I type this, clouds are gathering and the rain is threatening to fall. While I know portions of the country have been inundated with rain recently, we are still in a drought here, and the moisture is welcome. (Thankful #9)
Also as I type this, John is outside digging planting holes (Thankful #10), which is no easy feat in our very rocky soil. He's definitely spent a lot of time and energy transforming our yard from the wild hillside it was into a useable space. It's a work in progress, but I am constantly amazed at how much it has changed in the past 4 years.
How has your week gone? What things are you thankful for? Join Dyanne and the co-hosts of the Ten Things of Thankful blog hop and share with the class! http://tenthingsofthankful.blogspot.com/2022/08/hop-on-over.html