Lessons Learned from the Piano 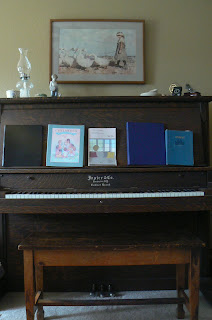 Confession:  I was not a very good piano student.  I started lessons when I was 5 or 6, and quit for the first time after about a year. I repeated that start-and-stop approach once or twice, and that was the extent of my formal piano training.  It must have been frustrating for my parents and teachers. However, my parents supported me in my decisions and my teachers gave me a good foundation.

Despite my lack of technical musical knowledge, I really enjoy playing the piano.  There is just something very "homey" about having a piano taking up a huge spot of floor space, and of being able to gather 'round the piano and sing together (which we do weekly during our Family Home Evening.).

When I was in junior high, I was asked to accompany the children's organization (Primary) at church .  That was when I really learned to play the piano.  Do you remember junior high?  That time in your life when all of your faults and mistakes were broadcast in neon lights to the rest of the world?  That's the perfect time to ask someone to play the piano weekly in a public setting, because it spurs one to practice!  I died of embarrassment on multiple occasions.  Some of the children were better piano players than I was!  The chorister was patient and kind, and I gradually gained confidence.

I no longer accompany for Primary, but I still find myself facing opportunities to learn humility.

Because the organ and the piano both have keys (but believe me, they are very different instruments!), often pianists are asked to play the organ at church.  Having absolutely no formal training in playing the organ has led to some colossal mistakes on my part.  Two in particular stand out in my mind:

1. The time I didn't realize that all of the stops were on.  The music sounded very "full" that day, but it wasn't until the sacrament hymn that I realized I was hearing trumpets!  Not the usual sound for quiet, sacred hymns.  I got a good ribbing from my friends that day.

2. The time not too long ago that I realized that the organ has a knob to the side of the keys that can be turned to transpose up or down.  I could hear that the sopranos were very quiet, but it wasn't until someone pointed out the knob to me that I realized that I was playing the songs transposed down quite a few steps.  The altos thanked me that day for allowing them a chance to sing the melody.  I'm not sure what the poor basses thought.

Learning humility isn't just a function of playing the organ, though.  My latest responsibility at church is playing the piano for two choirs.  I haven't made it through a rehearsal yet without an obvious-to-everyone mistake.  (While absolute perfection would be nice, I'm realistic enough to settle for making mistakes that the congregation won't hear and that don't throw off the choir.)  I think my biggest challenges, besides just playing the right notes, will be learning to turn pages during performances, and getting my fingers to play the sixteenth note runs at the correct speed.

In other words, I just need to practice, give it my best shot, and don't worry about me. I have been asked to play, and when I can focus outward on helping the choir present their message, and on helping the congregation feel the spirit of the music, I don't have time to worry about me.  Playing the piano is fun, and perfection isn't required to make it enjoyable for either the player or the listener.