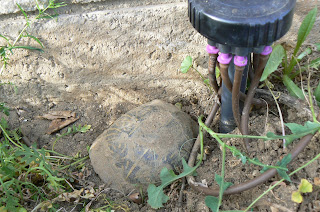 I enjoy spending time in my backyard, especially when the weather is between 65 and 90 degrees.  Today I was pleasantly surprised to find that the desert tortoise is back!  Actually, he probably never left, but we hadn't seen him during his hibernation time.  He showed up last summer, and we enjoyed watching him wander in the backyard.  When the weather turned colder, he made himself scarce.  I was pulling weeds today, and voila, there he was! 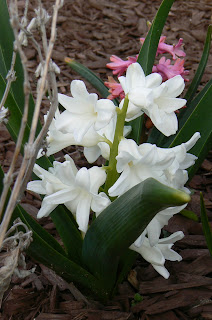 John really prefers brightly colored flowers, but he very graciously defers to my garden plans.  I have pink, blue, and white hyacinths planted, but the white ones are particularly beautiful now, I think. 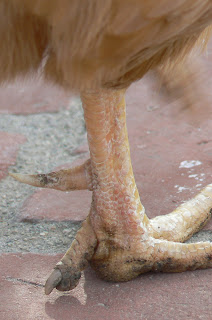 I've finally figured out which of my hens is attempting a sex change!  I've read that sometimes a hen will change to a rooster, if there isn't a rooster around, but I thought it was a fairly rare occurance.  We've never had roosters, and my small backyard flock is 4 or 5 years old now.  For about a year now, I've been hearing the occasional VERY pathetic crow, if you could even call it that.  Today I happened to look down at Rosie's leg when I let her out to free-range, and my mystery was solved.  I quickly checked the other hens.  No one else has grown a spur, and even Rosie just has one.  Why Rosie has decided she needs a change, I have no idea.  Luckily she isn't mean (like some roosters), and fortunately, the neighbors behind us have at least one rooster, so the other neighbors shouldn't be bothered by Rosie's pathetic attempts at crowing.  I'm not sure if she is still laying eggs or not.  Perhaps not.  Production has decreased due to the age of the hens, but now that the weather is warming, "the girls" seem to be keeping up with our demand.

My backyard discovery session came to a halt after I discovered the black widow.  I'm such a spider wimp.  I probably could keep weeding if I put on garden gloves, but why risk it?  :-)